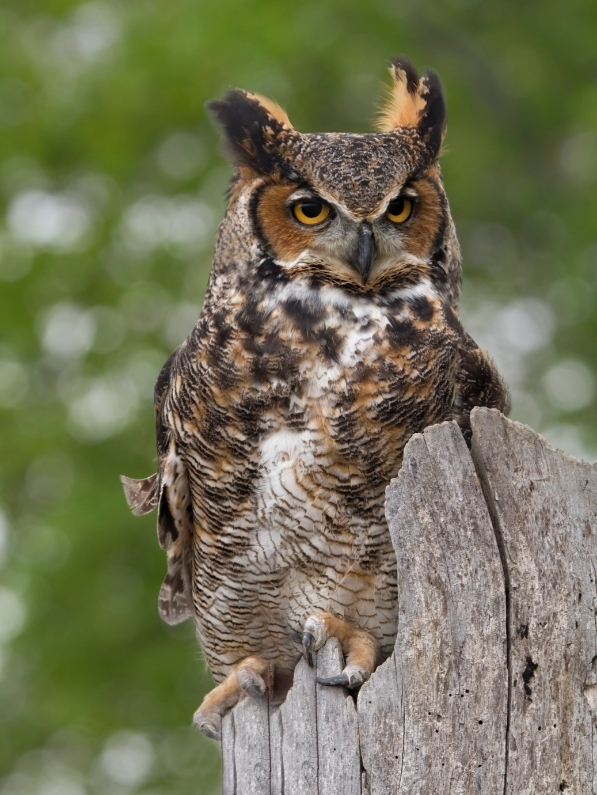 The Great Horned Owl, magnificent to behold, fearsome to its prey, embodies both the majesty and menace of nature. The heavily built, barrel-shaped species boasts penetrating eyes with vivid yellow irises, and tufts of feathers on its head that look like horns, or ears, but are neither. With spectacular binocular vision and hearing that is highly sensitive to depths and elevations of sound, it makes great use of secrecy and stealth to stalk its prey. Perched often on a barbed wire pole, its stillness can convey a terrible beauty.

Designer Cynthia Renée, bereft from a great loss in her life a few years ago, found herself rediscovering the fierce allure of nature. While enthralled by its beauty, she also got in touch with its sometimes hidden pain. It was a message that helped her to understand the unexpected curves that life throws at its human inhabitants—with every bit as much of the surprise and stealth of the Great Horned Owl.

Renée wasn’t the only artist moved by the duality of nature, she discovered. In one of the most famous passages of her book, “Owls and Other Fantasies, Poems and Essays”, the poet Mary Oliver wrote: “But the great horned [owl] … if one of those should touch me, it would touch to the center of my life, and I must fall.” Along with her long nature walks, Renée found great comfort in Oliver’s words and images, and the two inspirations eventually set her on a new path of artistic discovery.

“Beauty and nature have always pulled me back from the depths, and I found myself turning again and again to the metaphors the natural world provided,” says Renée. “It can be a harsh and impersonal place, but it is also filled with majesty and redemption.” The designer set to work to create a series of three-dimensional jeweled creatures, each based on a different Mary Oliver poem, to express her awe and wonder at the nature she was experiencing. Many of the works of art are wearable as brooches, pendants, and earrings; while some, like “Owl Queen,” can double as small sculptures.

For “Owl Queen”, Renée selected an owl that was hand-carved from petrified palm by a talented gem cutter. Then the designer placed her bird atop a huge green tourmaline crystal, festooned with a stainless steel “barbed wire” accent. To animate the owl and give her life, tiger’s-eye was used for her eyes. The gems were spaced out using a small spaghetti stick, then carved in, glued, modeled, and polished with diamond polish paste. The positioning of the owl’s palladium and diamond crown involved a lot of patient work, too: the feathered tufts had to be ruffled just as the owl would do so in nature. 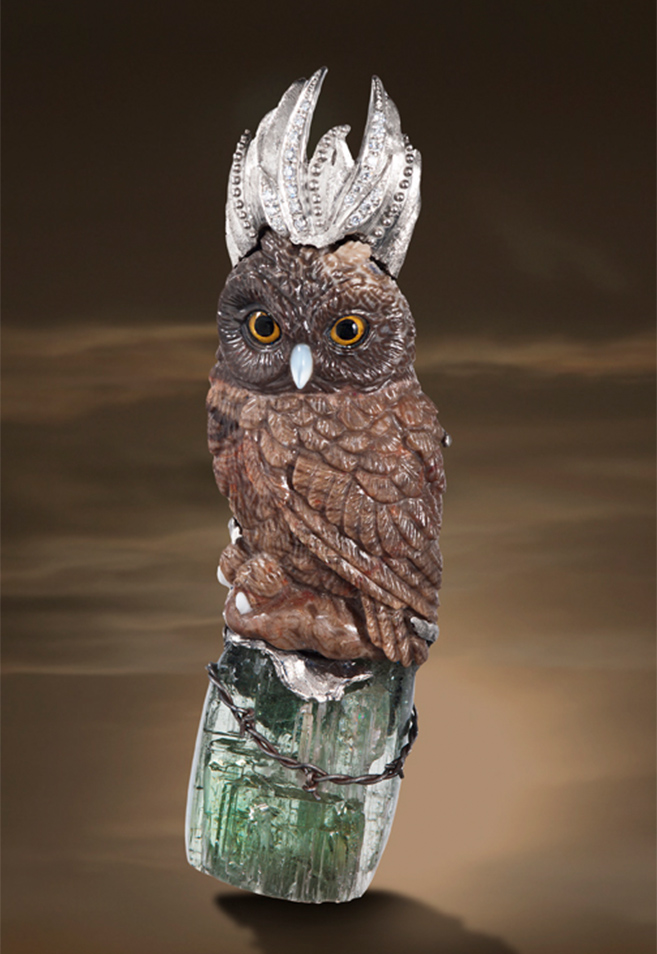