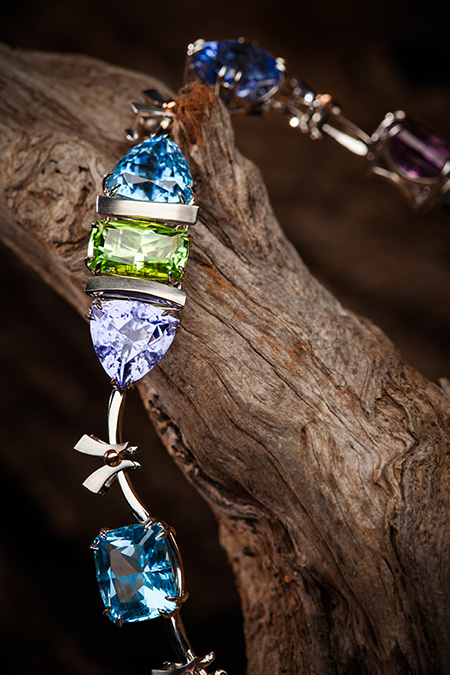 In the Spring of 2010, I took on the challenge of immortalizing one man’s love and devotion to his wife for their twenty-fifth wedding anniversary. The end result, after three long years of hard work involving an extensive global gem search, meticulous examination of thousands of gems, delicate yet precise gem cutting that also won First in the competitive “Cutting Edge Awards”, and expertise in color, creativity, custom design, and craftsmanship, was the masterpiece we know now as the “Torii” necklace was created.

My client, a top collector of colored gemstones, had the idea to collect a unique suite of the pastel shades of the ultra-rare copper-bearing (cuprian) tourmaline from Mavuco, Mozambique.  To a gem collector, these cuprian tourmalines are the Holy Grail for their rarity and unique colors, and the copper plays a part in the gems’ unique coloring.  Only three deposits are known to contain copper:  the “Paraiba” of Brazil, Nigeria and Mavuco, Mozambique.  The Mozambique deposit is the world’s largest known deposit of cuprian tourmaline and the neon-blue and green hues found in the finest stones closely resemble the most sought-after material from Paraiba, Brazil.

While much of the gemological attention goes to the neon-hued cuprian tourmalines, the Mavuco locality actually produces a wide variety of colors, including unusual lavenders, pinks, violet-ish-blues, blue and yellowish- and sea foam-greens.  My client is a visionary and had the foresight to collect a bouquet of these colors, which can be overlooked in the rabid rush for the neons.  He wanted the suite to serve as a “type locality” showing the hues of pastel cuprian tourmaline found in Mavuco, specifically.  He worked with me to source his vision. 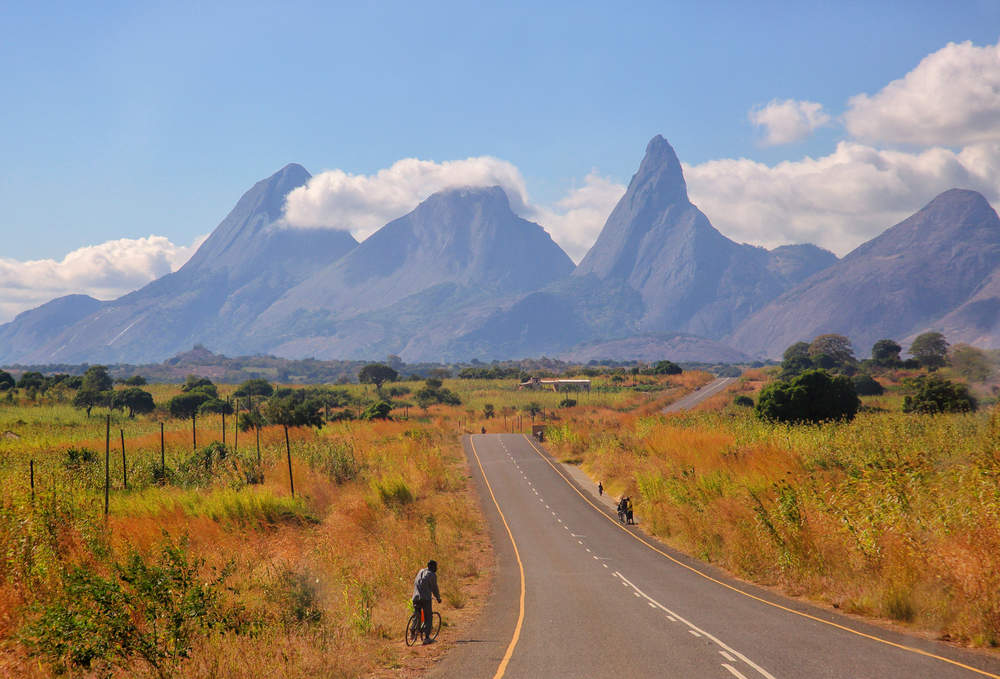 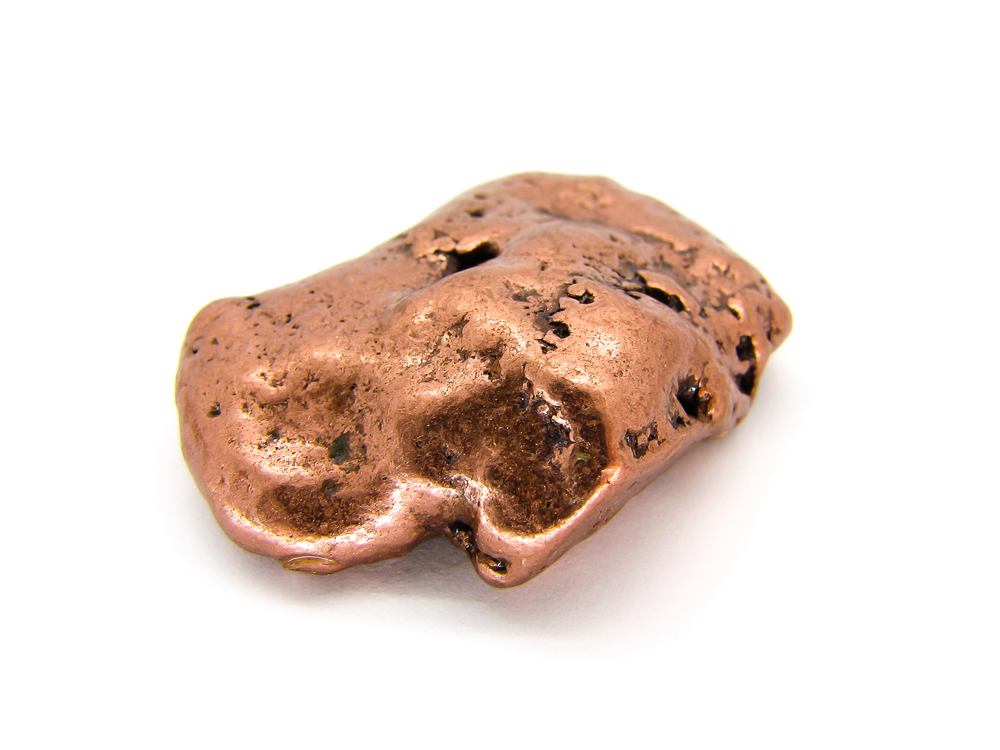 While much of the gemological attention goes to the neon-hued cuprian tourmalines, the Mavuco locality actually produces a wide variety of colors, including unusual lavenders, pinks, violet-ish-blues, blue and yellowish- and sea foam-greens.  My client is a visionary and had the foresight to collect a bouquet of these colors, which can be overlooked in the rabid rush for the neons.  He wanted the suite to serve as a “type locality” showing the hues of pastel cuprian tourmaline found in Mavuco, specifically.  He worked with me to source his vision. 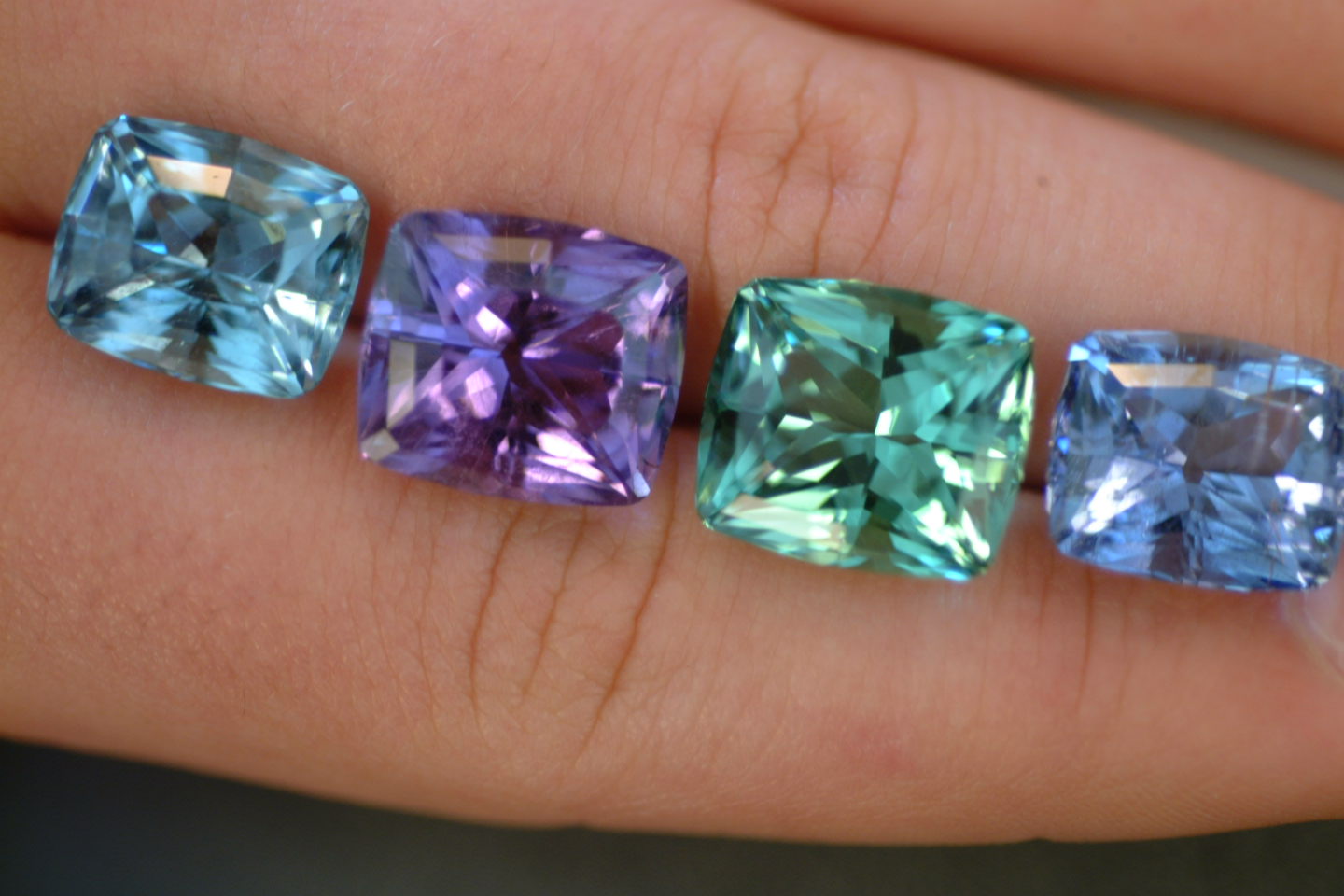 First the gems had to be found and acquired – and I developed a strategy for finding the finest quality, at the best price.  While Thailand is a gem-producing country, rich with ruby and sapphire deposits, it is best known in the gem trade as a sorting and cutting center.  Rough gems from all over the world are purchased by Thai-based dealers, then brought back to Thailand where they are treated, cut, sorted and distributed.  If a selection of rare cuprian tourmaline were to be gathered, it would be located in Thailand, not its country of origin, as there was a several years’ lull in production from Mozambique. 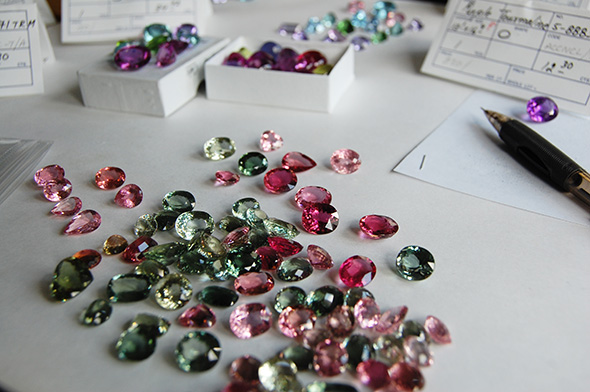 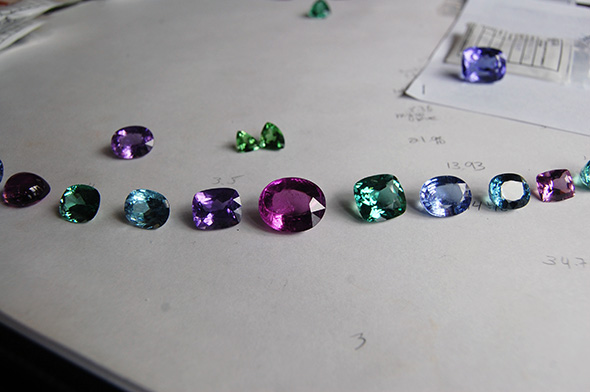 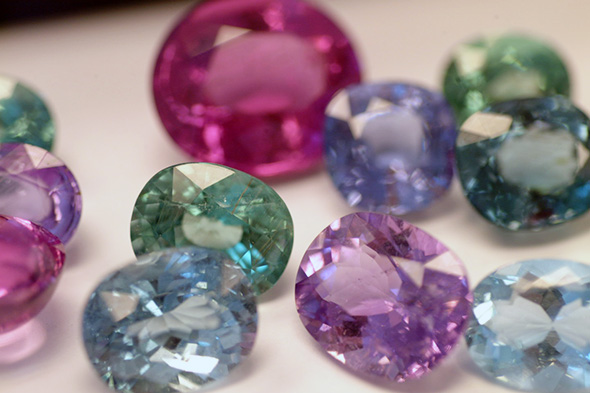 Because of the diminishing supply, I hoped the ones that remained would be languishing in the back of Thai safes or in the hands of various dealers who would want to move them after the world-wide economic “cleansing.”  My challenge was to hunt for the stones without alerting dealers to the specificity of my search.  If my goal was uncovered, dealers would naturally raise their prices, particularly for the last few gems needed to complete the suite.

Yet, even with an expert’s eye, one has to straddle chasing the theoretical suite in the sky and being flexible with what is available in the marketplace. Decisions had not been made regarding the shape and layout of the suite when the search commenced.  Therefore, all shapes and sizes had to be considered.  Since fraud and misrepresentation are particularly rampant among dealers selling any unusually colored tourmaline as a higher-priced cuprian, it was imperative that the gems receive documentation that they were, in fact, copper-bearing. 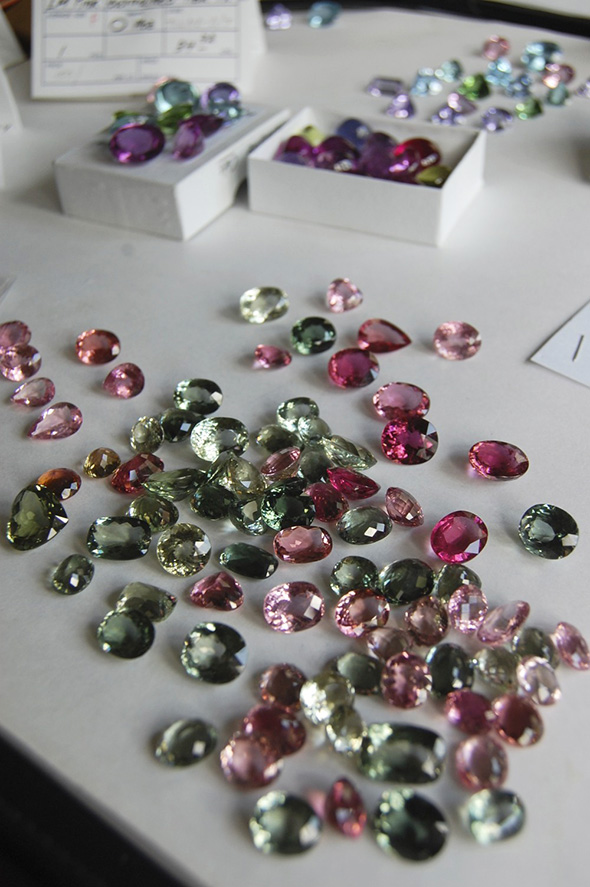 For two weeks I searched through 800-1000 gems and chose the very best in terms of the right balance of color, hue, texture and “feeling” for the necklace; the unity of the gems; and if they balanced together as a suite – and then on size and shape.  So, the end gems in the suite had to cross through many gates to finish, and most were disqualified at the starting line.

The newly procured cuprian tourmalines, while delightfully colored, were all originally cut using primitive “native cutting” designed to maximize the weight of the stone, not their beauty, fire, or brilliance. One benefit of reworking poorly cut stones instead of starting with unformed, rough gems was that the interior aspects of the stones could be examined and their internal characteristics could be assessed. However, the ease stopped there. Somehow, the gems had to be unified into a suite of varying shapes: cushions, round, cabochons, squares and ovals.

Once I had the rare gems back in the United States, I worked with lapidary, Zava Mastercuts, reviewing each gem’s optics and internal characteristics to determine how the light impacted the gem’s color and internal clarity, since recutting could potentially expose inclusions heretofore not highly visible.

Additional challenges for us included ensuring the outline for the necklace emphasized each stone’s clarity and brightness. Moreover, the cutting patterns had to be considered to ensure they minimized visual size differences between pairs of different colors. This endeavor required technical prowess and artistic vision from all members of my team. 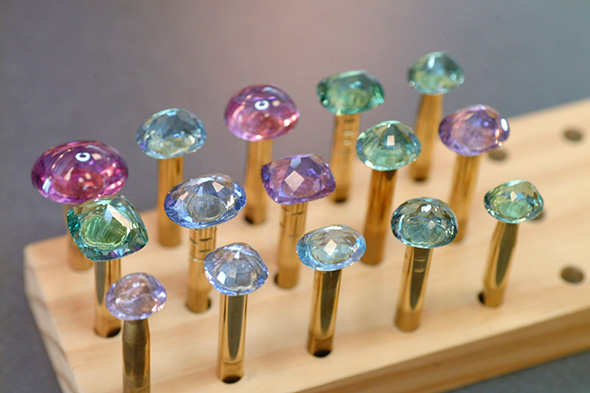 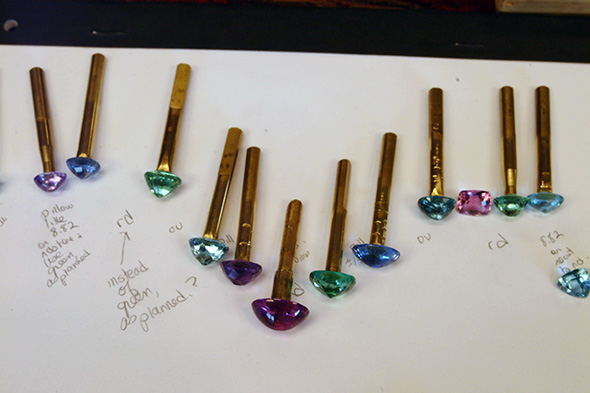 Many hours were spent studying and brainstorming before the first cut could be made. It was decided to cut all the stones into Zava Mastercuts’ version of the cushion, “the pillow-cut”. This would unify the pieces thematically and eliminate the concern of varying cuts accenting the different internal clarities amongst the gems in the suite.

A word must be said about the color order and placement, which was key to making the suite sing. I think of colors as musical chords. When colors play well together, they can be a symphony. Sometimes they are discordant jazz. I wanted to avoid the color equivalent of elevator music. 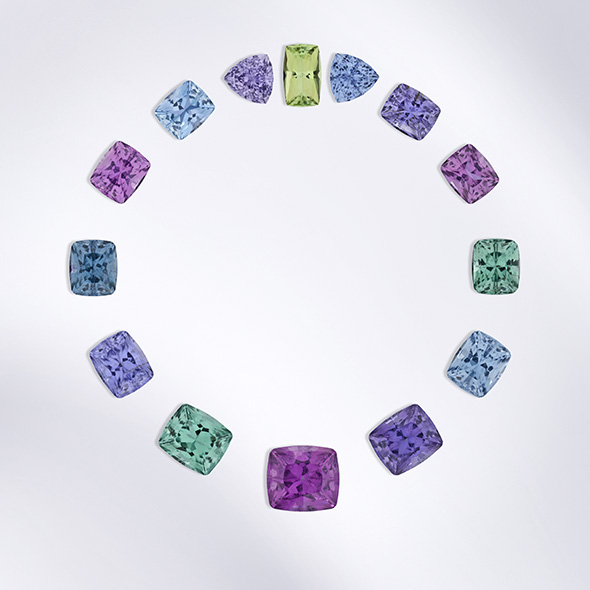 At first look, the suite may be an ethereal bouquet, yet it is rooted in structure – similar to music that is intricately noted yet seems simple to the unschooled listener. The tourmaline colors had to be harmonious with those on each side of them and with their “sister pair” on the opposite side of the necklace. Yet too much harmony can be bland. So, I punctuated the color like an arpeggiated chord by spreading the three different colors, lavender/pink/blue-green, symmetrically through the suite.

The result is a peaceful and harmonious tension that keeps the viewer’s attention. The tension is furthered by the symmetrical balancing of the center stone with the three clasp gems, which are opposite each other on the circle and of different shapes than the other stones.

The creation of the cuprian tourmaline suite was a tremendous coup – and their beauty and technical expertise allowed it to win First Place in the Pairs and Suites division of the highly competitive “Cutting Edge Awards” from the American Gem Trade Association.

With gems so extraordinary, the goal of the necklace design was simplicity. The gems needed to take visual precedence. So, it was decided platinum’s white gleam would allow the icy pastel gems to glow and a rose gold accent (rose gold is alloyed with copper) would nod to the gems’ copper content. 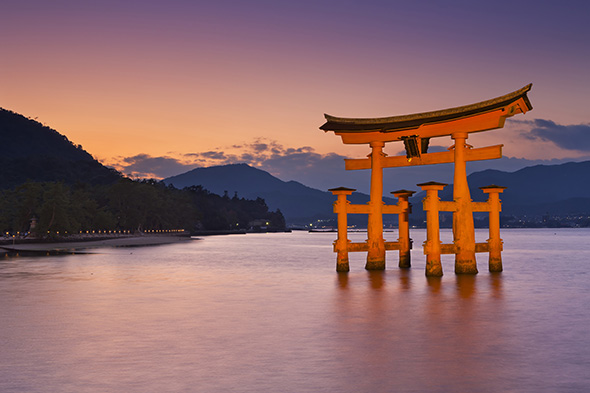 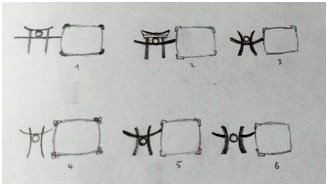 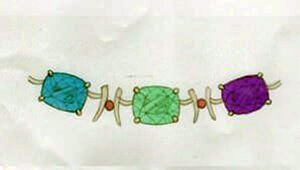 Next was the design. Three rounds of design concepts were created before the final one was chosen.

The Torii Gate design motif was ultimately selected by my client due to his appreciation for Japanese art and its use of tranquil, serene, and meditative characteristics reflecting harmony.

Once the design concept was chosen, it was time for the design team to contemplate the engineering. Cynthia called on long-time friend and master jeweler, Mirjam Butz-Brown to bring the Torii necklace to life. Working synergistically for two decades, Mirjam – with skilled hands and sharp intuition – knew how to translate Cynthia’s vision into the third dimension. 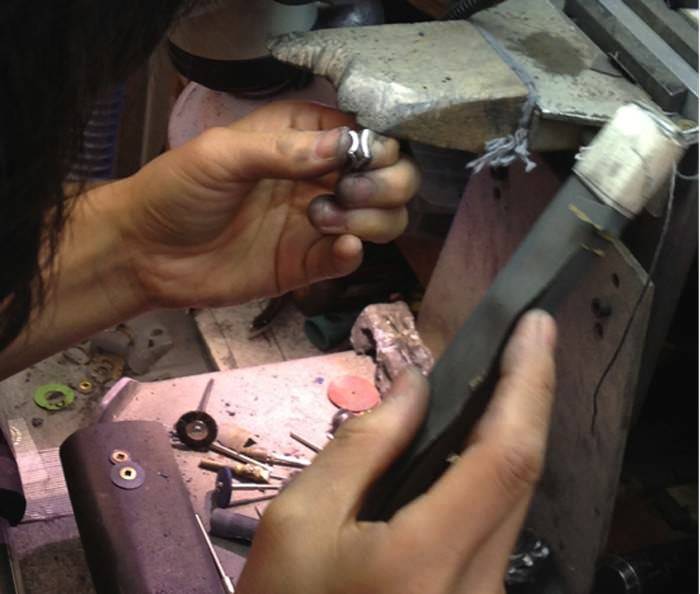 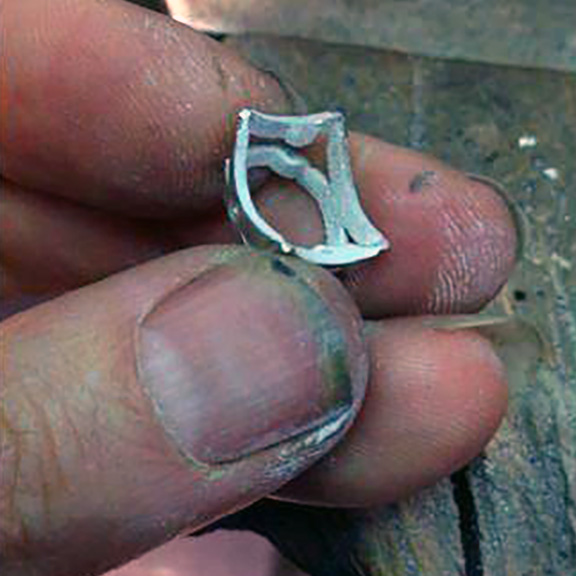 The necklace would be primarily crafted using the technique of casting, with extensive hand assembly and some hand-fabrication. Also important, the necklace has many solder joints, and platinum is better for soldering on cast pieces. Two platinum alloys were used as well as rose gold in the 14-karat alloy.

Artistic ideas can always be envisioned, but engineering is what allows them to come to life in ways that enable them to be worn and admired. This is an extremely important step that most jewelers dodge. It took approximately two weeks of working between the jeweler, Cynthia and the casting technician to get the engineering finalized. This involved visualizing the finished piece from all angles that were then worked and reworked again.

It sounds poetic that the gems should sit in a basket, yet that is what that piece is called – the basket. After figuring out the basket shape and how the prongs and “Torii Gates” would attach to gems, the work began.

The necklace was now ready to be mock assembled to perfect how it would lay on the neck. During mock assembly, the necklace was held together with temporary pins to see how it would hang and any necessary adjustments were then made. In all, the necklace was assembled five times, tweaking and adjusting so all the elements would lay just right.  To reach the desired 16-inch length, some of the bar lengths were shortened. This ended up working well, as the shorter bars blended well with the smaller Toriis towards the back.

Once the stones were set, the Torii elements were satin textured, then assembled, laser tacked onto the attachment bars, and soldered. The rose gold spheres were made using a square rose gold wire melted to form a bead on the end. Each rose gold sphere was then refinished, polished, cut from the wire, refinished again and inserted into the drilled seat where it was laser welded from the underside, so the welding would not show from the top. 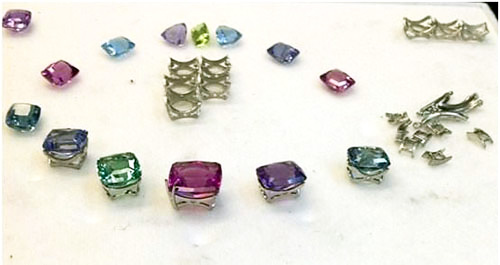 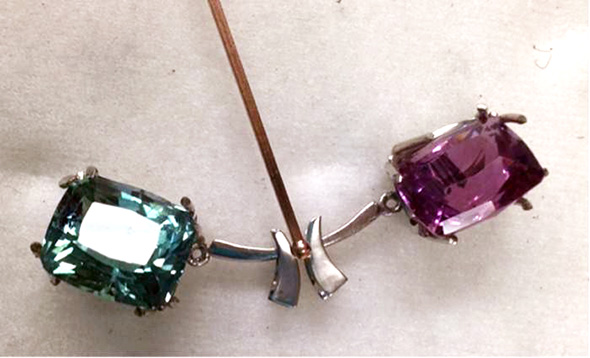 The final step in this spectacular process involved attaching the Torii elements and bars to the baskets, using the technique we engineered to see a minimum number of attachment points face up on the necklace. The Torii bars had a ring on their ends that slid into the tube we placed inside the basket. From underneath, a connecting pin of platinum wire was pushed through the ring in the tubing and then laser welded. 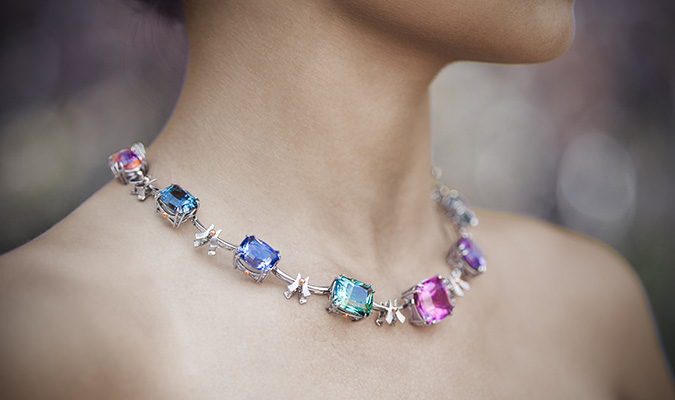 Time is precious. Beyond love, time is often the most valuable gift there is to give. It’s easy to purchase a ready-made jewel for someone to enjoy and admire. But to love and respect someone so profoundly that a three-year commitment from start to finish was made to instill meaning and depth into each facet of this necklace speaks volumes.

From the detailed and extensive effort to collect the perfect gems to the aesthetic and technical virtuosity required to cut each stone to its own perfection, time was given. From envisioning and creating the design to crafting the necklace, time was given. From the 259 soldering joints on the Torii necklace to the thoughtfulness inherent in the clasp’s meaning, time was given.

It takes time to perfect a masterpiece be it love, marriage, or a work of art. This was truly a labor of love for all involved.