0 Items
Designing Eye | Jewelry Stylist
What Paris Hilton’s Jeweler May Not Know
You may have missed the breaking news last week that Paris Hilton’s $2Million engagement ring was found in a Miami club ice bucket last weekend.  While dancing with her hands in the air, the giant ring ...
by Cynthia Renée Marcusson 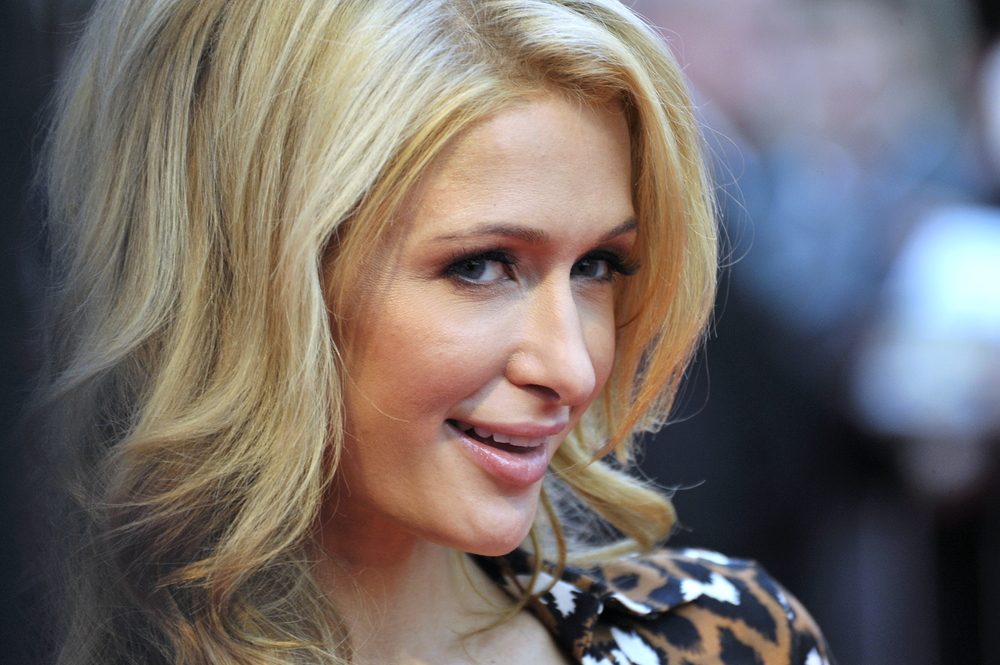 You may have missed the breaking news last week that Paris Hilton’s $2Million engagement ring was found in a Miami club ice bucket last weekend.  While dancing with her hands in the air, the giant ring flew off in a packed and dark venue during “crazy early hours of the morning.”

“Thank God by some miracle my finance found it before somebody else did… I have amazing Karma!”  Methinks her karma was enhanced by the club closing during a frantic search by her security team and a frantic finance.  A new kind of Ice Bucket Challenge?

There are a few lessons we can learn from this, but let’s start with this:

There is no such thing as a perfect ring fit, but we can get close.

Our fingers have seasonal, monthly and even daily fluctuations in size.  Humidity, movie popcorn or the futile resistance of margarita’s salty rims… A client in New Jersey has a gorgeous Peach Sapphire ring knowing it will be a tad loose when winter’s cold contracts the finger and a bit tight in summer when the finger swells with the warmth and humidity.

Good ring fit means most of the time you can take your ring off easily enough, so you will remove it before sports, housework, gardening but it’s not so loose it falls off when you wash your hands in a public restroom. 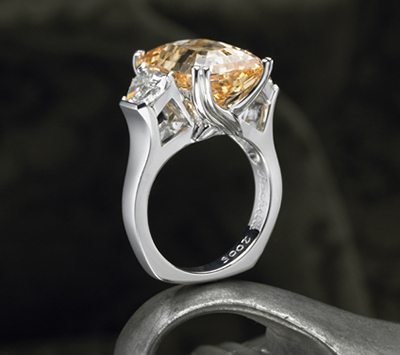 In times when your ring is a bit loose, guard it with a guard ring:  a narrow band ring that is more snug on the finger so it keeps the larger ring on your hand.  Guard rings can be very narrow – they don’t need to be big.

The guard rings in this photo match the shape of the “Pearl Gate” pearl and red spinel solitaire ring, though guard rings can be round shaped, especially if needed to compliment the design of the ring they are guarding. (The Pearl Gate solitaire is available at $4185- contact me for more details.)

There’s a saying that a woman should wear her wedding band first on the finger as it’s “closest to your heart,” but that really doesn’t make sense from a guard ring prospective. If your engagement ring is loose, put it on first, and then your wedding band. 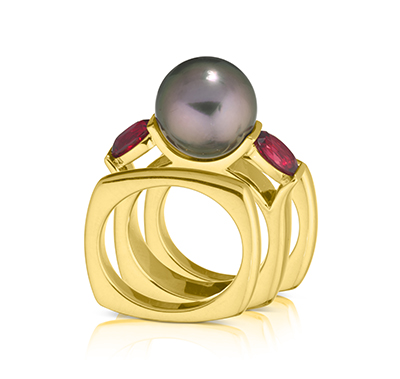 Do you always wear the same size of jean? I bet not – the size you wear depends on the cut, the pattern and the fabric.  Rings are like jeans – a lot of the sizing has to do with the cut and shape of the design.

You will wear a larger size in a wide band ring; a narrow band ring size will be smaller. In fitting a ring that has a pocket of space in its underside, I size the ring smaller because the flesh of the finger is easily squeezed into that space when the ring is worn.  Wide band rings, with no undercarriage, have no place for the finger flesh to squeeze into so they fit more tightly and need to be sized larger. 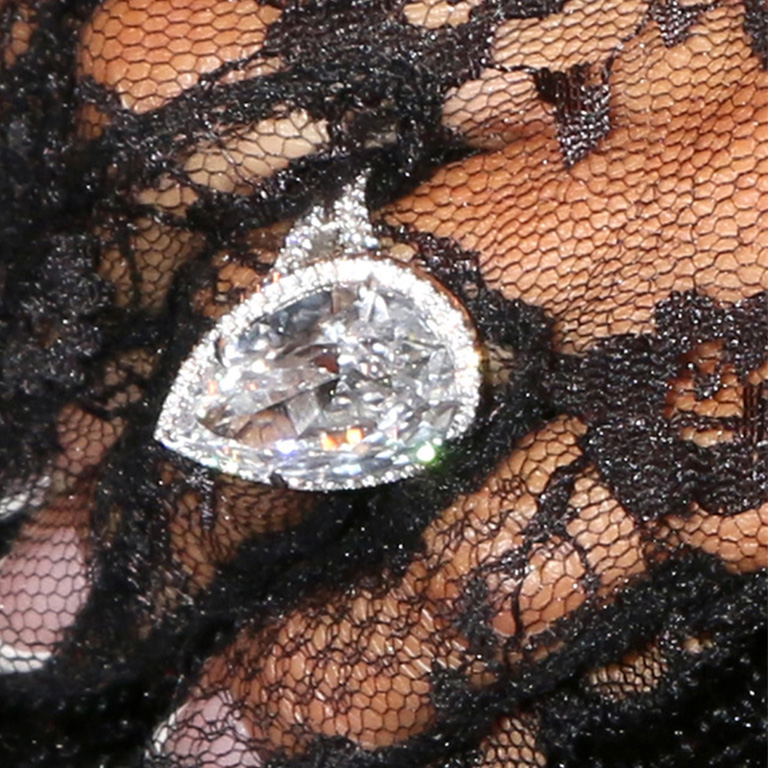 Hilton’s ring is a 20-carat diamond pear-shape set in platinum with a split shank. The shank shape is round, and it does have some width around the finger, though perhaps to balance the visual of the large diamond instead of securing the ring?

I don’t know the designer’s motivation, but I DO know this: Top heavy rings featuring a large gemstone can be made so they are much less likely to tip, slip and flip. The “Cynthia Renee shank” has a round interior and a slightly squared exterior. Clients tell me it is the most comfortable ring shank they’ve ever worn, AND that shape helps the ring to fit the finger correctly and stay upright.

The “Knot” solitaire, on the right, features a 46.35 carat fancy-cut Amethyst and because of its shank shape, it stays upright.  (It’s $6575 –see details here if it’s calling you). 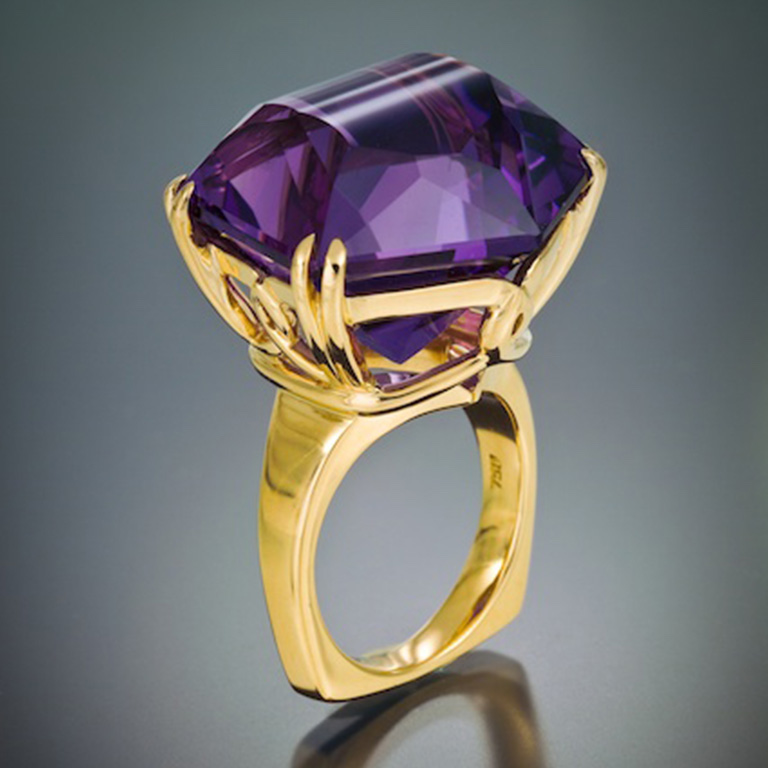 I’ve seen lots of internet rules about how to fit a ring, such as a toothpick should be able to fit between the ring and your finger. A good ring fit is more individual than the memes indicate.  Finger shape also needs to be considered.

Like everything else human, fingers come in different shapes. Some have small or “barely there” knuckles and the rings have to be very snug, so they don’t slip off. Fingers can be “cone shaped” having a smaller finger base than knuckle, actually narrowing as they extend. It’s hard to hold a ring on that shape and the ring should fit tightly.

Some knuckles are a lot larger than the finger, which can be a challenge to fit as the ring needs to be larger to fit the knuckle then spins around the smaller finger diameter. Some ways around the bigger knuckle fit is to install “speed bumps” or a springy white gold “horseshoe” inside the ring which accommodates the size differential. Hinged ring shanks are actually getting rather sophisticated now and can also be used to have the ring snap over, instead of slide on, the finger.

Ring “muffin top” is a “thing” now. (This is fascinating to me in accessing our culture.) You probably know that “muffin top” is a slang term for when a person wears a tight waistband causing their sometimes lean flesh to spill over, just like the top of a muffin sits over the edge of the baking pan. I lurked through a few online bridal forums and saw young brides worrying if their ring fit was giving them “ring muffin top,” i.e. the finger flesh squeezing out from under the ring. 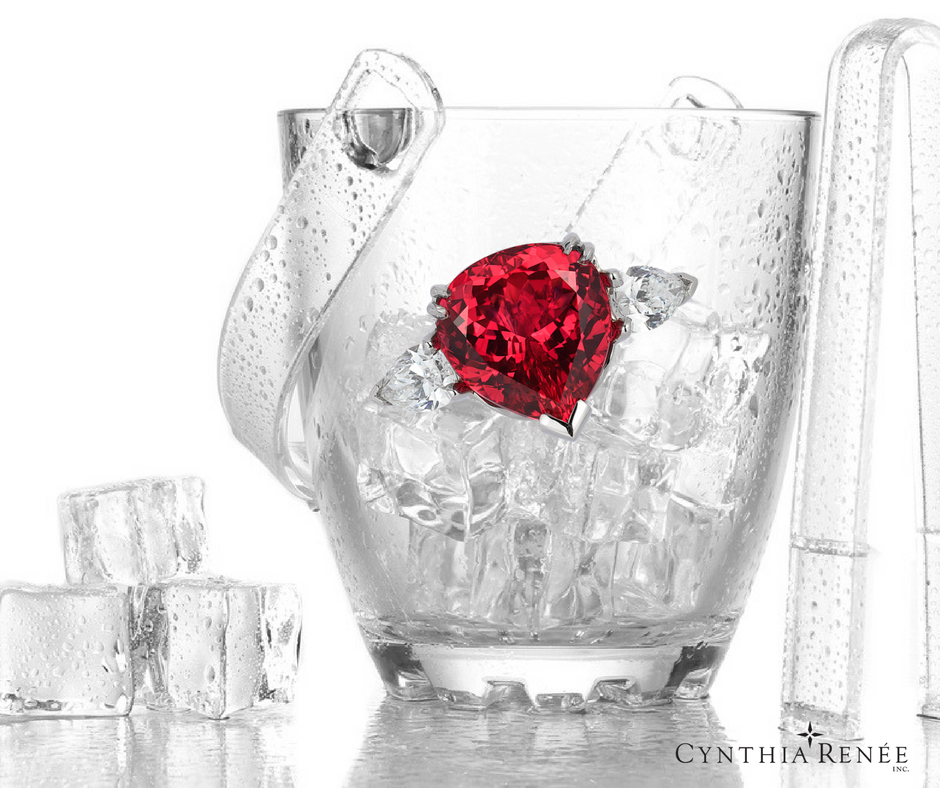 Yes, our rings can be too tight.  BUT… depending on the shape of the finger, you may need a tighter ring fit, so it doesn’t fly off your finger and somebody has to close down a nightclub to find it…. in an ice bucket.