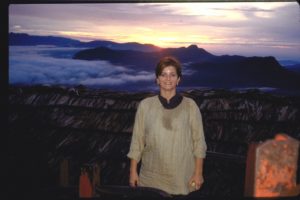 Holy to Christians, Muslims, Hindus, and Buddhists, pilgrims of all faiths ascend 7,359-foot Sri Pada in the darkness of night to pray as the sun dawns above the Indian Ocean. In December of 1998, I was unusually lucky in assembling an elegant suite of unheated Blue Sapphire and trekked up the hallowed mountain as a prayer of gratitude. I wore a simple pair of South Sea pistachio-colored studs. Pearls, the most womanly of gems, luminously reflected the full moon we hiked under.

I made the trip with a family of Sri Lankan friends. To assure an early start, we left the coastal capital of Colombo in the late afternoon, had a light supper at a guest house along the way, and made a base camp of sorts in a crumbling hotel not far from the mountain. The father and the driver sat sentinel in the truck outside our room. The mother, their two children, and I curled on an unsheeted double mattress. The mosquito net over the bed was ripped and torn, ineffective against the insects zinging through the open windows in the concrete block walls-wholly, holey yet holy. “Let’s see what this is all about,” I thought.

Sleeping with so many, so intimate, was new to me. I listened to my friend 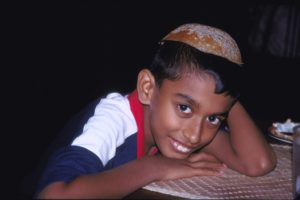 soothe her children to sleep, petting their curved limbs, humming low and rhythmically. One of the kids spooned into me. I warmed and softened around the child’s body, surprised by my instinctual response-how right it felt. The full moon dipped the leaves outside in silver; a lone dog barked. Few adults slept before our 4 am wake-up.

Fueled by anticipation, bananas, and biscuits, we took the early part of the trek in an easy walk through a darkened landscape of tea plant and rubber tree silhouettes. The full moon illuminated our path. The last half of the seven-mile hike was a strenuous series of narrow cement and rock steps that grew steeper and steeper as the trail wound towards the top. First the mother and children dropped out, eventually the father, leaving the driver and me to ascend together. From December through April 100,000 people make the trek, but I don’t remember seeing anybody else until I reached the top.

On the summit I could hear prayers offered up in different languages and religions. Language was no barrier though, all of us expressing in warmth the common experience of beauty and reverence. You might think sharing prayers in such a setting at sunrise was “The Moment” for this trip, but I was undergoing another awakening.

Under that tattered mosquito tent on a small bed with her children, my friend Anagi let me experience the holy love of mother and child. With the sunrise came the dawning that I was at a fork in the road. At 40, married to my business, I was already a short distance down one of those paths. Could I turn back? Could I cut over to the other road? 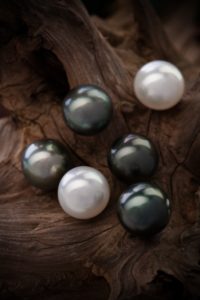 Those were the thoughts that began reflecting beneath the full moon as I trekked up Sri Pada. What began as a grateful prayer for some sapphires dawned into another era in my life. And, again, I wore classic pearls: simple, round, glowing like the mother moon. The cycle of full moon setting, earth turning, moon passing off to a rising sun marked another cycle’s turning in my life.