0 Items
Legacy Jewels | Once Upon A Jewel
Ring of Fire
Jewelry designer Cynthia Renée creates a legacy jewel with a client telling the story of her family’s evacuation during a California fire.
by Cynthia Renée Marcusson

In October of 2007, I flew to San Diego County to visit my friend and adventuresome client, Mary. The backcountry of San Diego is home to me and where I started my life in gems scrambling around various tourmaline mines, studying geology.

Mary and I planned a visit to the Bowers Museum’s exhibit on gemstones, then some play with our own gems together at her kitchen table.

We made good time on the freeway. The dry Santa Ana winds had cleared the air of particles so the mountain ranges appeared immediately, as in a pop-up book.

Before the museum, we stopped at the Chili Pepper for lunch, a cafe featured in the carefree dating days of Mary and her husband.

Before I could say “pollo en mole poblano,” her normally cool-headed husband called with some hot news. Fires started in the eastern part of San Diego County were flaming towards their home, which was in an area of steep, dry chapparal-covered canyons and hills. Leaving our Margaritas on the table, we immediately drove back home. 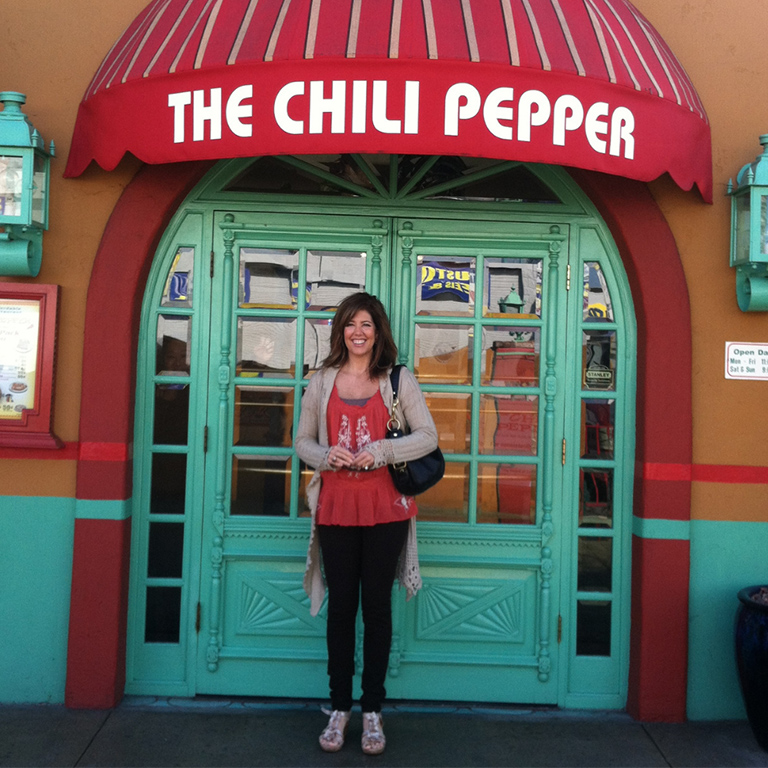 In California, there is such a thing as “fire weather.”  The frequent droughts matchstick the plants and dry up any water. Fall brings dread when the strong dry Santa Winds blow in sucking up any residual moisture, fanning any spark into a massive life-threatening fire. These winds can be hurricane force.

If you’ve been through a decision to evacuate, you’ll know that an aspect of denial creeps in – especially the first time. You don’t think it’s really going to happen. Could you really lose the precious home where you’ve raised your children? Surely, the advancing fire front will deviate, or the firefighters will quiet it. Local news and the Weather Channel are constant soundtracks adding to the mental jumble. 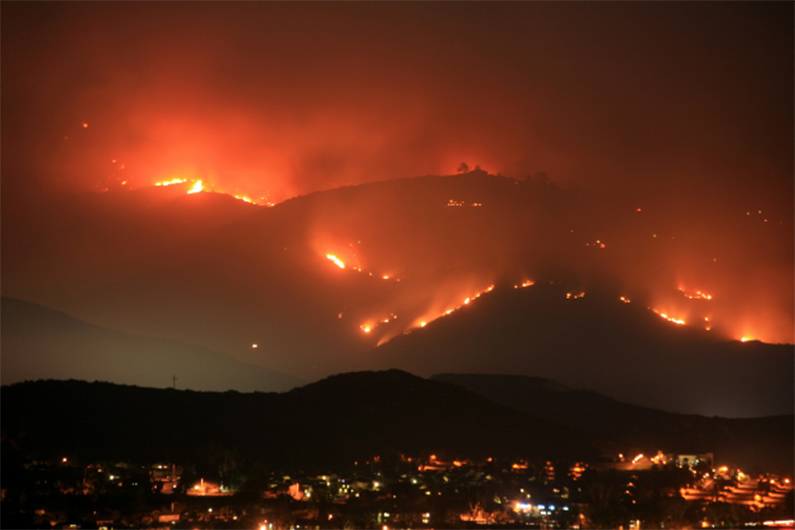 The flame front moved closer and closer. As evacuation moved from possibility to fact, I watched Mary and her husband consider what to keep and how to protect what they left behind.  That process honed what is important and who the jewels really are.

Around 1 am, two kids, three adults and three cars caravanned in eerie solitude through a world lit by fire. Dunes of ash drifted across empty roads. Burning tree branches turned flame throwers as the mighty wind whipped through them and raging ribbons of red fingered through the canyons. Instead of midnight blue, the night was sepia colored, and the world seemed at end. 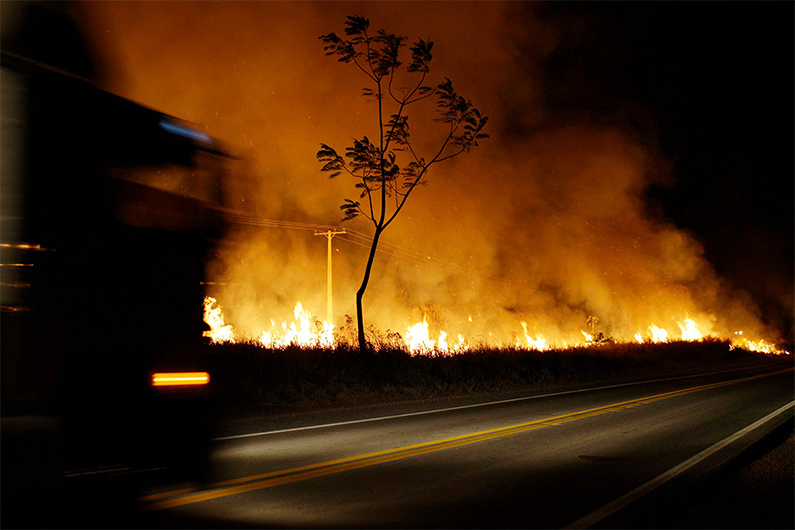 We caravanned in eerie solitude through a world lit by fire.

Little did we know that this would be the first of several evacuations. Thirty-five miles and several days away, the fire would also chase us from the sanctuary of Mary’s parents’ home. At that point, Mary’s family found a conduit to the coast, and I was able to cut across a military base and find a plane home to North Carolina.

Ultimately, this set of fires displaced close to 1 million people, 10 lost their lives and 140 firefighters were injured.

Mary was born under a lucky star. When her family returned home about a week later, they found their home still stand. Next door neighbors were not so lucky.

It took some time for the dust to settle, and Mary to turn back to creating custom legacy jewelry.

Mary is a colored gem collector and had purchased a rare 22-carat hot orange Spessartite Garnet from the Cynthia Renée Gem Collection.  Hot orange – the color of fire. 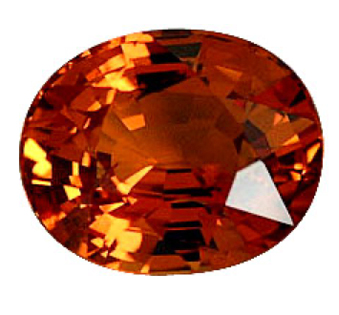 As Mary turned her Spessartite Garnet in her hand, the gem itself spoke of a ring commemorating the family’s trial by fire. So, we set about turning this fireball of a Garnet into a phoenix of a ring.

Mary wanted a bombe shaped ring and was very specific about having long sweeps of flame that would overlap at places and show airspace between them – much like the real flames of the fire she became so intimate with.

With Mary’s small finger, that is a lot to accomplish in size 4.75 ring featuring a 22 carat center-stone! 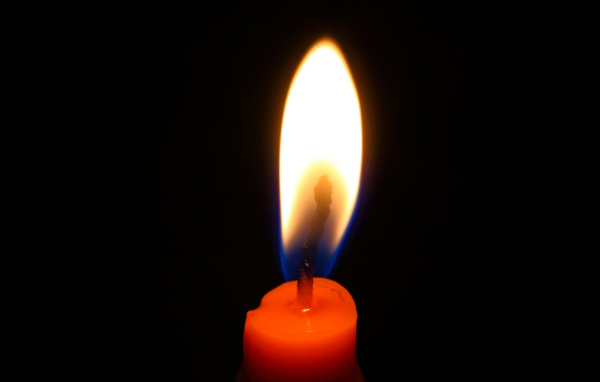 The inner core of a flame is the hottest and blue. Moving out from the flame’s center,
the temperature decreases and the colors progress from yellow to orange and finally red.

For over 25 years, I’ve had the pleasure to work with master goldsmith Mirjam Butz Brown translating mental and emotional images to gem and jewel form.  Together, Mary, Mirjam and I solidified the ring’s concept, then concentrated on the ring’s shape and the placement of the metal flames.

Having multiple gold colors, we planned to cast the yellow and rose gold flames separately, then assemble them together by hand.  Once we got the shape we liked, we decided what flames to texture, and how. 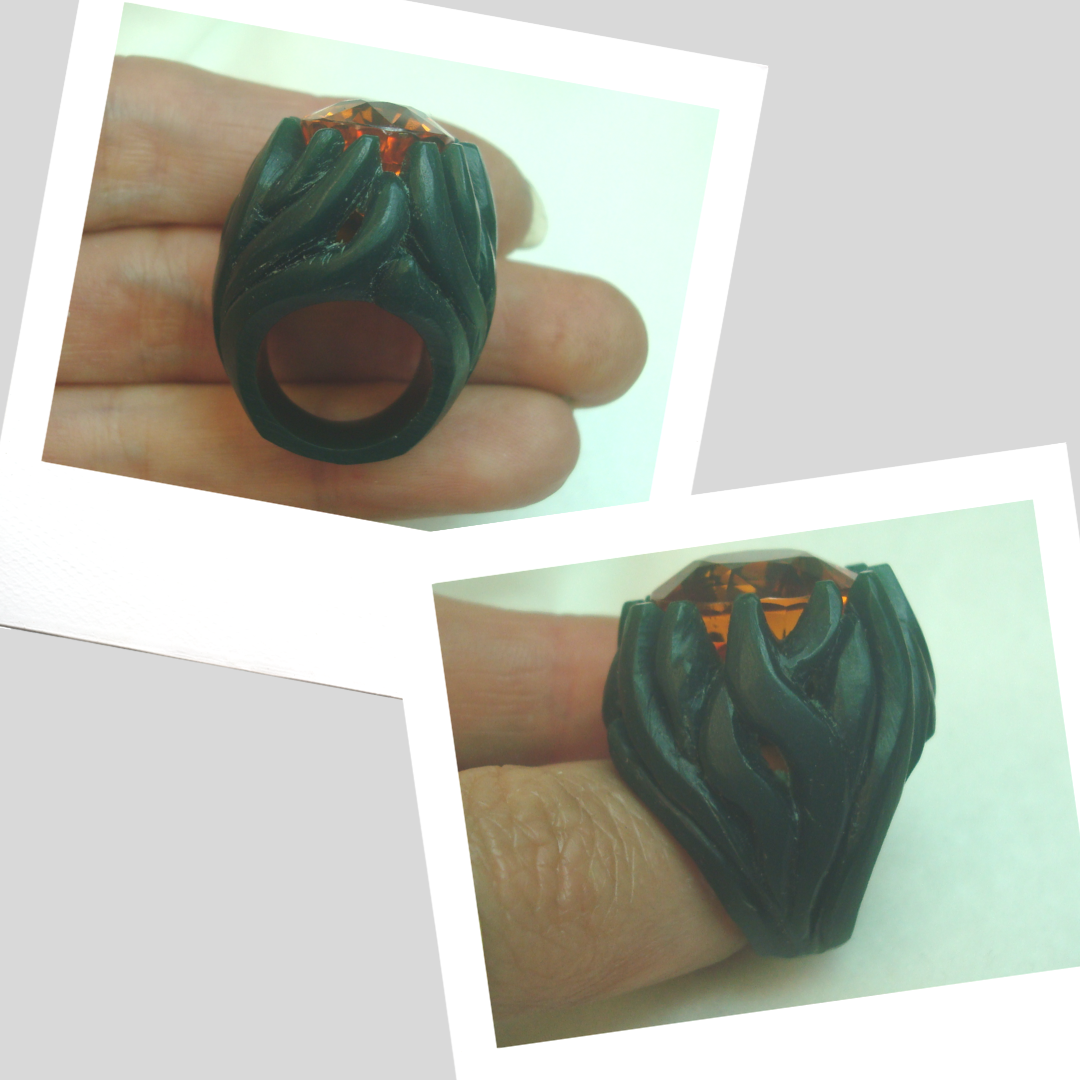 First step was to carve a wax playing with the ring’s shape and form.

Having multiple gold colors, we planned to cast the yellow and rose gold flames separately, then assemble them together by hand. Once we got the shape we liked, we decided what flames to texture, and how. 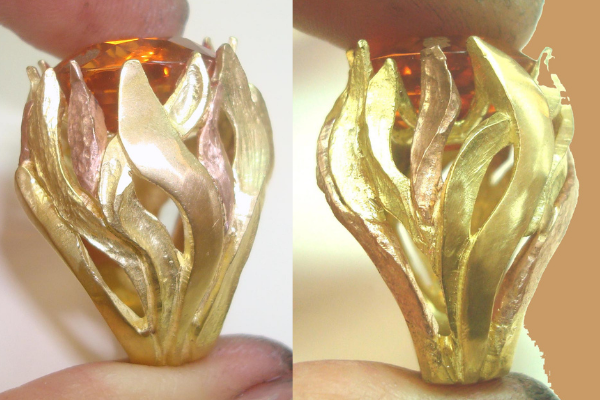 Rose and Yellow flames were cast separately then hand assembled;
the flame placement is different from every direction.

In creating a fine custom legacy jewel, always…always….we take time to experiment while creating. That is how we bring jewels to life, not just translate from a paper. As usual, we experimented with the layout of the gemstone “flame” color progressions, starting with a palette of gems in different hues. On the photo below, we eliminated the flame of reds, feeling the red row too distracting. 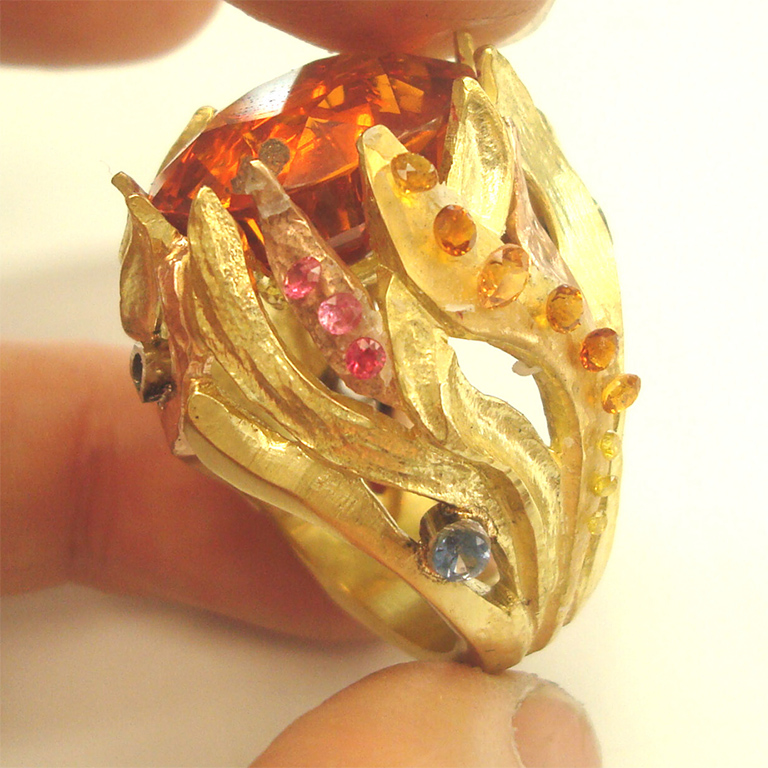 Experimenting with the layout of flame colors;
we ultimately eliminated the red spinel row as being too distracting.

We tried arranging the gem colors into the actual flame color progression, but the colors felt forced. Ultimately, we decided upon a progression of Yellow Diamond, Yellow Sapphire, Spessartite Garnet and Red Spinel. Two strategically placed Blue Sapphires, tube set in platinum, visually quenched the ring’s heat. A white diamond was added, as the ring is “white hot” and a neutral accent helped bring out the flames. The photo below will show you some of the variances.

Each side of the Ring of Fire has a different combination of gems, shapes and colors.

The application of the subtle textural combinations was vital to the energy of the finished ring – too many can be overwhelming, and to few listless.

Some of the texturing was done in engraved linear sweeps paralell to the flame’s length. Other textures are random and circular echoing the chaotic energy of the fire advancing on the client’s home. Around each round gem, we engraved a halo of sparks. 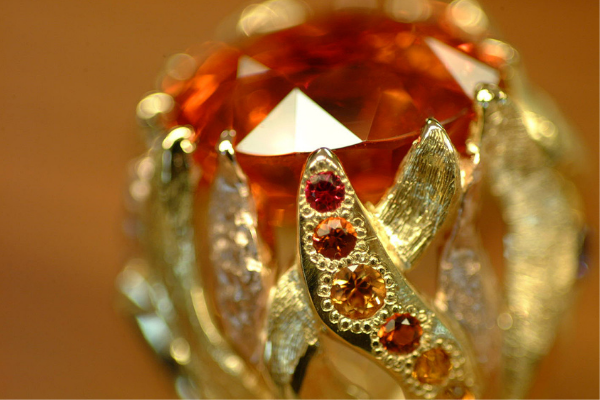 The balance of textures is paramount in bringing the Ring of Fire to life.

Below, the incredible Spessartite sits like a fiery caldera in the ring’s center and can be seen from all viewing angles. 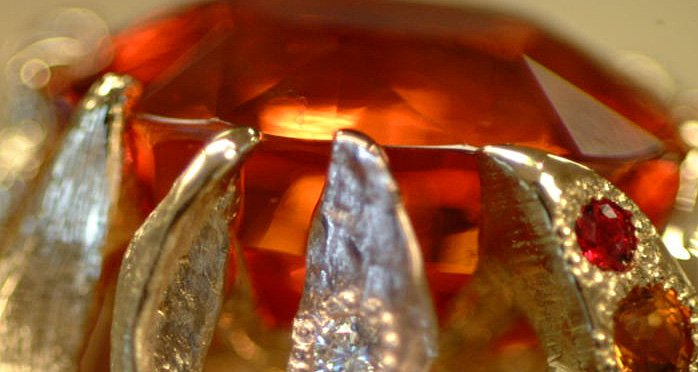 The resulting ring is a combination of many separate design elements and as powerful as the fields of flames advancing on the Mary’s family home.

For Mary, the ring is the embodiment of a powerful memory and reminder of what is really important. For as beautiful, rare, meaningful and costly as this ring is, the client remembers that the truest jewel in life is the love of family.